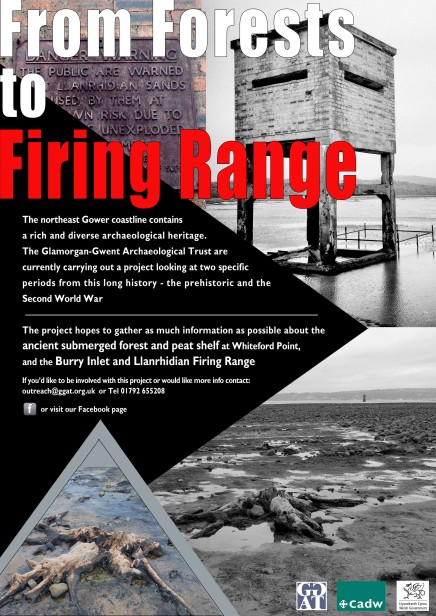 GGAT are currently looking for volunteers to help with a project on the north Gower coast.

The project will be focusing on two primary targets that were identified by the Arfordir project  as needing further work.  These being:

the prehistoric forest and peat levels at Whitford Point.

Paul Huckfield, Arfordir Coastal Heritage project Co-ordinator and Rowena Hart, GGAT Projects, have been at Cwm Nash, Vale of Glamorgan this afternoon, filming with the BBC and ITV.  They have been talking about the cemetery located on the cliff top there and the human remains that have been exposed and on show since the storm of 5th of January.

Rowena does all the talking as Paul has man flu!

Filming the bones for the BBC news

This latest discovery is mainly thanks to Mr Morgan for his swift action in recovering the remains before they were lost to the sea.

The two grave cuts exposed by the January storms

The Trust have a Ministry of Justice license to excavate the rest, and the landowner’s permission, and are seeking grant support from Cadw to enable us to do so.

++++URGENT!++++URGENT!++++URGENT!++++
Due to the January storms a large number of archaeological sites along the coastline have been damaged/destroyed and we need to know what has been lost. The storm has also been a double edged sword and has also exposed a large number of new sites and features, such as new prehistoric footprints at Kenfig and cannons at Rest Bay. GGAT is therefore asking all it’s groups to visit their stretch of coastline and record any damage or new sites. Please be careful as the weather is still stormy and we suggest that you go out in a group and not on your own and use your common sense at all times.

A beautifully sunny day at the GGAT Cwm Nash Survey. The site was very busy today with our fantastic and hard working volunteers! We also had lots of visits from members of the public passing through on their coastal path walks. It was lovely to meet you all.
We began our day by setting up our GPS station at the top of the hill to the south of the site. What a beautiful view from there. Our volunteers surveyed then surveyed two grids of resistivity and two grids of magnetometry. A good set of data collected.
We also undertook the survey of the edge of the receding cliff by GPS. To enable us to do this safely Richard Hamilton of Atlantic College was on site to attach us to the land by anchored ropes and harness. The volunteers then continued the topographic survey of the site with great detail.

Many thanks to everyone who gave their time, skill and enthusiasm, to the project today. Looking forward to tomorrow!